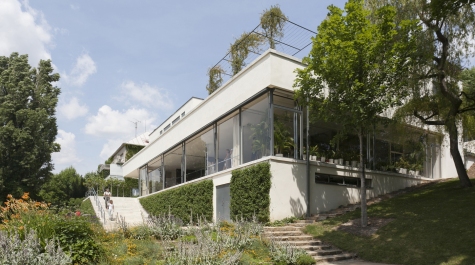 This is one of the most celebrated villa structures in the world which set new standards of living and is an outstanding testament to the clarity and simplicity of the functionalist design of one of modern architecture´s pioneers, the brilliant Ludwig Mies van der Rohe.

Ludwig Mies van der Rohe designed the Villa for Greta and Fritz Tugendhat in 1928 and the building was completed by 1930. Mies was famous for his so called skin and bones style. He detested clutter and created free and open spaces using modern materials. The Villa Tugendhat is a beautiful example of his achievements. Mies used the revolutionary iron framework which enabled him to dispense with supporting walls and arrange the interior in order to achieve a feeling of space and light. He paid attention also to the relationship between the man made and nature which is evident in his use of natural materials such as the onyx wall and tropical woods. A impressive element to this house is how it used the most up to date technology with its air-conditioning system and its engine room which lowered some of the windows into the floor and opened the main living area to the outside world! It went through reconstruction in the 1980´s but the basic setting of the villa has been preserved, although some things, such as the original fittings in the bathroom, have disappeared

If houses could speak then the Villa Tugendhat would have a very interesting tale to tell indeed! After the Jewish Tugendhat family emigrated, firstly to Switzerland in 1938 and later to Venezuela, the Villa was confiscated by the Gestapo and it became the property of the German Reich in 1942. Over the years the house was put to different uses including a private dancing school and as a physical therapy institution for children with spinal handicaps. It has been the property of the city of Brno since 1980. Interestingly, in 1992 the political leaders of Czechoslovakia met there to sign the document that formally divided the country into the present separate states of the Czech Republic and Slovakia and if that wasn´t enough, it was also used as the principal location for the movie Hannibal Rising in 2007!