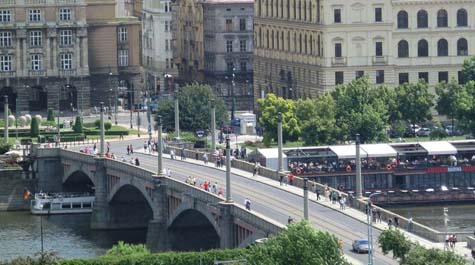 The bridge connects Aleš Embankment (Alšovo nábřeží) and Rudolfinum with Lesser Quarter (Malá Strana). It is named after the Czech painter Josef Mánes (1820 - 1871).

Building the Mánes Bridge took three years and it was completed in the same year when World War I started, in 1914. It is made of concrete and represents the spirit of Modernism in Prague. After the completion of the bridge the nearby footbridge, calledRudolf Bridge (the prince Rudolf after whom Rudolfinum is named), was removed.

The Mánes bridge was designed by Alois Nový, František Mencl and Mečislav Petrů. It is 186,4 m long and 16 m wide. It has four segmental arches.

It is one of the several Prague bridges over the Vltava river used apart from cars and pedestrians for trams as well.

Josef Mánes 1820 – 1871) is a famous Czech painter, one of the most prominent representatives of Czech romanticism. Thousands of people can see his work in Prague though they don’t know about it. Mánes painted the images of the twelve months that were added to the Prague Astronomical Clock in 1870.