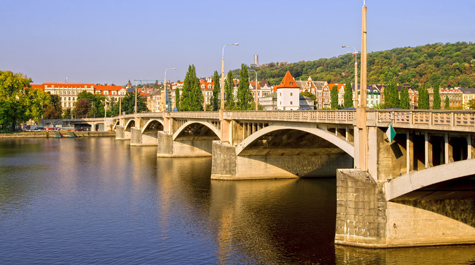 Jirásek Bridge (Jiráskův most) was built to connect Jirásek Square in the New Town with Dientzenhofer Garden in Smíchov. You will easily recognize the bridge as on the New Town part there is the famous Dancing House.

The construction of the bridge started in 1929, it has seven parabolic arches that are composed of several separate ribs fixed in the piers. It is 310 m long and 21 m wide. In 1931 the bridge was opened for trams only and two years later, in 1933, for cars and pedestrians as well. Tram tracks were then removed.

Building the bridge encountered a serious problem at the very beginning, on the Smíchov side of the Vltava river there used to stand a Baroque pavilion that was in the way. It was decided to move the pavilion 110 m up the stream but there was no insurance company willing to take the risk insuring such an adventure. The problem was then solved by demolishing the building.

The Palacký Bridge is one of the bridges in Prague from where you can take a river cruise on a boat. The boat will then take you either back where you started or to a landing place at Čechův Bridge by the Jewish Quarter.

The bridge is named after Alois Jirásek (1851 – 1930) a Czech writer and politician. His probably most famous work is the Ancient Bohemian legens (Staré pověsti české), including legends such as Libuše, Maiden’s War, Přemysl etc.